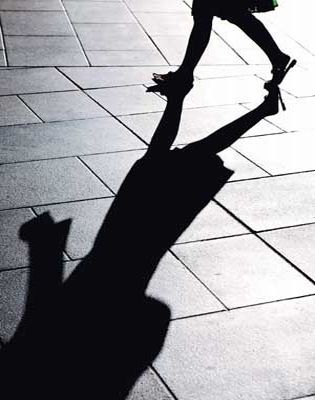 Yet as any of us know, perhaps all too well, this is scarcely where the problems end and I would like to examine a few further issues through the lens of the Shadow as understood by Carl Jung, a very helpful psychological metaphor that I thank Sady Doyle for introducing to the conversation. Let us begin with a fairly acceptable Wikipedia definition of the thing in question:

In Jungian psychology, the shadow or “shadow aspect” is a part of the unconscious mind consisting of repressed weaknesses, shortcomings, and instincts. It is one of the three most recognizable archetypes, the others being the anima and animus and the persona. “Everyone carries a shadow,” Jung wrote, “and the less it is embodied in the individual’s conscious life, the blacker and denser it is.”[1] It may be (in part) one’s link to more primitive animal instincts,[2] which are superseded during early childhood by the conscious mind.

According to Jung, the shadow, in being instinctive and irrational, is prone to projection: turning a personal inferiority into a perceived moral deficiency in someone else. Jung writes that if these projections are unrecognized “The projection-making factor (the Shadow archetype) then has a free hand and can realize its object–if it has one–or bring about some other situation characteristic of its power.” [3] These projections insulate and cripple individuals by forming an ever thicker fog of illusion between the ego and the real world.

Sady Doyle used this concept to suggest that what we as activists are most keenly aware of in others is often as not something we suppress and fear in ourselves, to the point where we- in essence- project the failure onto other people. The more virtuous we seek to be, the more we define ourselves against the evil in the world, the more likely it is that we will have a harder time seeing the shadow in ourselves. Or, to resurrect my own metaphor, to see the shadow being cast by our swords.

This often works in very particular ways in activist communities and is precisely at the heart of many problems we all confront; it is one of the reasons that being a radical activist always leaves you with a funny taste in your mouth, that perhaps your real ‘enemies’ are your comrades at times. It is an interesting take on that old saw about the British Parliament: the Opposition sits in front of you, and your enemies are behind you. Yet while some people become disillusioned with activism for these reasons, for that ever pervasive sense of having to fight harder with your fellows than against the very oppression you’re purportedly organised against, the opposite has happened with me. It’s actually entrenched my radical trans feminism because what I see is not some depressing and noxious ‘truth’ about what feminism actually is but how it fails often to live up to its own ideals.

The issue is not feminism itself but the world in which feminism is necessarily situated. Our Shadows are internalisations of patriarchy itself that then become projected outwards into our work in bizarre ways. But they are not so bizarre that they are unintelligible.

At my university, for instance, I have dealt with some rather awkward situations with the faculty where a particular pedagogical vision held sway among certain members of the department: shock value and discomfort were important teaching tools. That the people who advocated this were white and cis did not matter as much to them as the fact that were feminists and radicals who sought to include everyone and criticise everything. Noble, mighty, swords of truth thrust defiantly into the air.

This, of course, leaves aside an important question: for whom does the shock have value?

When you have a professor telling a rape survivor to “suck it up and stop being such a baby” because she fears an assigned film with violent sex may trigger her, what does his feminism mean in that moment? It means something rather patriarchal, although he just won’t admit it. This is where every activist movement runs afoul with “the ends justify the means.” For this professor, his radical feminist project involves colonising the experiences of others, harvesting their emotions for the greater good and using them to teach. This comes at the expense of those who feminism claims to fight for, but never mind. There is a radical goal in mind and that matters most: to unsettle, to discomfit, to drag people out of comfortable illusions and delusions.

All well and good, never mind a woman whose comfort comes in precious islands of luxury that she struggles to hold onto.

What does feminism mean in this moment? It means there is a shadow of patriarchy being cast. If a white cis male Economics professor were doing such a thing to his students, perhaps this feminist man might well have a justifiable conniption fit and speak loudly and proudly (and truthfully) about the entitlement and privilege of that professor. But if the culprit is a gender studies prof? Well, he’s doing it for the right reasons.

The ends justify the means.

END_OF_DOCUMENT_TOKEN_TO_BE_REPLACED

Begin typing your search above and press return to search. Press Esc to cancel.