This is a repost of a very early post on this blog that I felt- for funz- should be more readily accessible. Enjoy.

Quick, how do you draw a political cartoon?

If your snarky answer is “very, very carefully” then you’re demonstrably wrong. If your answer is “with an eye towards elucidating complicated subjects in a visual medium” then I will have to laugh most heartily for thou art a silly one.

Ultimately, political cartooning is one of the most addicting, unedifying, and destructive media in the press at large. Some webcomic authors, all of whom are young people, are already mocking the so-called art. It’s not a slight against the artistic talents of the men and women who draw them, mind. Some are quite good. The problem lies with the almost self-satirising silliness of the medium they’re forced to work in.

One that uses almost comically overdone visual metaphors that fail so much they have to be brazenly labeled in order to be intelligible to the reader.

Ever since the peerless British satire programme The Day Today (a sort of forerunner to fake news shows like The Daily Show) aired its segments with ‘Brant’, the physical cartoonist, it seems that this ridiculous artform has come under ever increasing scrutiny for its overall uselessness, obviousness, and the fact that it’s biased in a thoroughly artless way.

Opinionmakers, like the seductive, incredibly sexy author of this article, are biased by default. But there’s a fine line between making a case and just being an asshole. Most political cartoonists fall into the latter category. When you see a political cartoon odds are you love or hate it, and if you hate it you can think of several arguments against the tendentious point being made.

The point of arguments and of opinion pieces at large is to convince people of the rectitude of your views. Political cartoons merely cheerlead aggressively for their own side. They do not have arguments, facts, figures, or carefully constructed reasoning, just an ugly caricature and a series of speech bubbles in whose brevity all profundity and reason is lost.

How *can* you distill something as complicated as race relations, the war in Afghanistan, or healthcare reform into something as simple as a single unmoving picture? The only way to do so is by leaving out every detail except one relevant one with your personal bias colouring in the rest of the piece. Last time I wrote, I mentioned a couple of major tropes that emerged in cartoons critical of President Obama’s healthcare reform. They were more heat than light, in a very basic way.

What do we learn from seeing Obama gleefully snapping a long rubber glove on while standing behind a white male everyman helpfully labeled “Taxpayer” as Obama says “This is going to hurt”? The ostensible message is that healthcare reform will be painful, unpleasant, and expensive. And apparently that spending money is like being fisted. Unless it’s for a flat screen TV, of course.

That besides, there are too many political cartoon clichés as is. Those healthcare tropes are just the most obvious from a very contemporary issue. Other related tropes include a patient lying in the OR, helpfully labeled ‘healthcare reform’ or ‘healthcare crisis’. President Obama must be very flattered by the dozens of dashing portrayals of him in a white lab coat. The rest of us must be getting just a little weary of seeing healthcare represented by a five foot tall gel-cap (or maybe it’s a suppository, you know these conservative cartoonists).

Again, these are dozens of different cartoonists, uncreatively using the same images over and over again.

But there are scores more generic mainstays. Let’s look at a few with the help of my beloved slugs:

There’s the family on the couch reading the newspaper and making some tendentious joke about it:

There’s the Bludgeon-You-To-Death-With-My-Visual-Metaphor type that has to label everything in order to give it even a tiny bit of meaning: 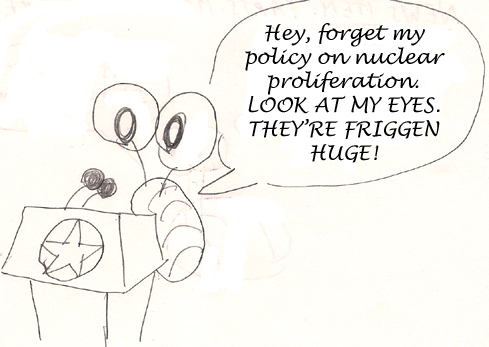 There’s the perennially lazy “News Item” comics which fail so hard at contextualizing an issue that they have to basically put a headline at the top of the cartoon and have their caricature underneath it in a cheap attempt to make up for the heretofore lack of cartooniness in this political cartoon: 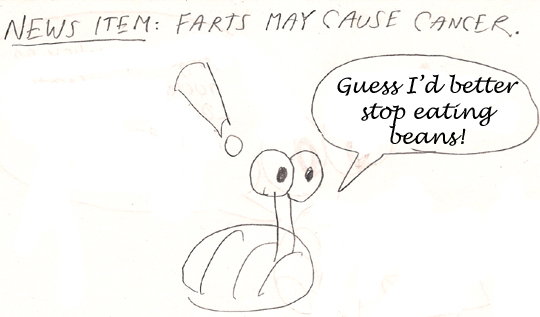 There’s a class I especially loathe which effectively kills political cartoons as any sort of timeless art. The Referencer. If a popular movie, no matter how bad, hits theatres you can be sure a gaggle of cartoonists will somehow, and often very cackhandedly, work it into their parodies:

And finally, perhaps the most general trope of all, the “I’m stealing your shit” trope that tries to cast a generalised You as a victim of a highwayman in the form of the government or some other powerful institution:

There are countless more that I couldn’t take the piss out of by drawing them (My hand got tired):

The car at the petrol pump. The kids going trick or treating. The family around the breakfast table. The college commencement speech. The suburban man answering the door. The suburban couple sitting in front of the TV making a snide joke about some news story they’re watching. (Note that the general stand-ins for us the general public always portray us as roughly middle aged white citizens in a well appointed suburban house. [Don’t get me started on how shabbily political cartoons treat young people].)

Over and over again, we have seen these same images used by liberal and conservative cartoonists alike for dozens of different issues. It’s old, it’s repetitive and it does nothing. Bonus irony, many right wing cartoonists draw particularly snarky cartoons about union workers. These cartoonists are usually in the newspaper union at their place of work.

They are quintessential preaching-to-the-converted, and as the fairly recent debacle with the New York Post monkey comic shows, the medium encourages stupidly offensive and disrespectful imagery. How else to describe a medium that trades on caricature and punishes a politician not for their views but for having a big nose or large ears?

If indeed the newspaper business is dying, let political cartoons be the first organ that fails. Transplant it with a column written with some measure of dignity and with a desire to illuminate. (How’s that for a visual metaphor?)

5 thoughts on “The Political Cartoons”